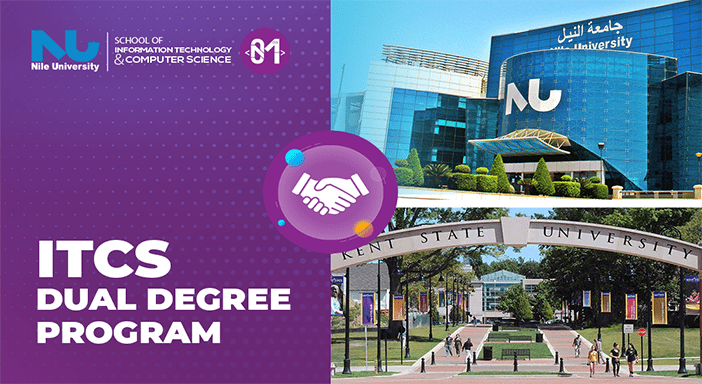 NU has a good and prestigious position among the Egyptian universities and always tries to be a leading university in both research and academic tracks. One way to achieve this goal is to build strong collaborations between it and other well-ranked international universities.

In order to enrich collaborations between these parties, last year, Nile University signed a number of international agreements with a number of well-known international universities. Among these agreements is a memorandum of understanding with Kent State University (KSU) in the United States of America. Over more than 10 months, the two universities (Nile University and Kent State University) conducted series of meetings to activate the MoU between the two parties by establishing a dual program (2+2) in the field of computer science, through which ITCS students will be able to study at Nile University for four semesters.

Then they will be able to complete the rest of their studies (four more semesters) at KSU and as a result, they will be able to get a Bachelor's degree in Computer Science from both universities. Accordingly, we are pleased to reveal that we are now approaching to sign the contract between the two universities regarding this dual program.
Students admitted in Fall 2022 should be able to join the program by Fall 2024, however, current students should be handled case by case according to the study Roadmap between the two institutions.